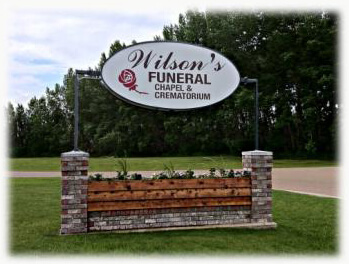 For the past 50 plus years, Wilson’s Funeral Chapel has been and continues to be an independent family owned company serving family's needs in Central Alberta with locations in Lacombe and Rimbey.

In 1962, Glen Fenton and Max Kirkman built a funeral chapel facility at the corner of 51 Avenue and C&E Trail in Lacombe. In 1976, Bruce and Mary Lou Wilson purchased the company and one year later, Steve Maetche, Mary Lou’s eldest son joined the company. The company name was changed to Wilson’s Funeral Chapel in 1978 and continued to operate at the C&E Trail location for another 20 years.

During that time, Wilson’s Funeral Chapel also operated a branch office in Rimbey until 1994 when upon securing property, began construction on Rimbey’s first and only full service funeral chapel facility to better serve the needs of the community.

In 1998, construction began on Wilson’s Funeral Chapel’s present facility in Lacombe which was opened in October of that year.

Alex and his wife Kayla have since purchased the company, on August 01, 2018 while Steve and Terry embark on enjoying a much deserved retirement.